About Us: The Project

On March 19, 2016, during a visit to Sevilla in the midst of Holy Week, my wife Becky and I had the extraordinary opportunity to attend a performance of the Miserere by Hilarión Eslava at the parish church of Santa Ana (known also as “The Cathedral of Triana”), interpreted by the choir and orchestra of the Asociación Coral de Sevilla under the direction of Jesús Becerra. To our surprise, the church had already been full since well before the performance. Days later, we briefly met with maestro Becerra and with members of the Asociación Coral and we talked about Eslava, his music, and about Sevilla’s Miserere. We found out then that this is a popular and deeply-rooted tradition in Sevilla and throughout Andalucía.  For Becky and for me, this was our first direct and personal contact with the music of Eslava. I can only describe those days as a truly intense experience.

Hilarión Eslava was consecrated as a priest in the Roman Catholic Church and consequently, should have had no children. But apparently he did: Ramón Rufín y Valdés (my great-grandfather) and possibly a brother two years older, Federico. Ramón was born in 1845, at the time Eslava moved to Madrid to take up his post at the Royal Chapel. Very little is known about Federico, except for his death in Sevilla in 1849 at the age of six. Ramón’s mother (or possibly the mother of both children) was almost certainly María Dolores Rufín y Lugo, a native of Sanlúcar de Barrameda and resident of Sevilla. María Dolores was the sister of one of Eslava’s Sevillian students and a close friend of the maestro’s, Juan Rufín. Ramón and Federico received at their baptisms the surnames of Carlos Rufín (one of Juan’s brothers) and his wife, who are listed in the baptismal certificate as natural parents but disappeared from their lives soon thereafter.

As one would expect, there is little definitive proof of any of this, and Eslava’s descendants are not mentioned as such in any of his biographies, but there is ample circumstantial evidence backing it up, including the common place of residence in Madrid of Hilarión, Ramón and María Dolores (at number 8 on calle San Quintín, in a building that still stands today), the final will and testament of don Hilarión, which singularly favored Ramón and María Dolores, and  a promissory note signed by Hilarión on behalf of Ramón when the latter was studying Law in Madrid.  There are also the few Eslava personal belongings scattered among Rufín family members, the frequent and sometimes oblique comments among members of our family on the subject, and, most of all, in my opinion, the astonishing physical resemblance of my grandfather to his. 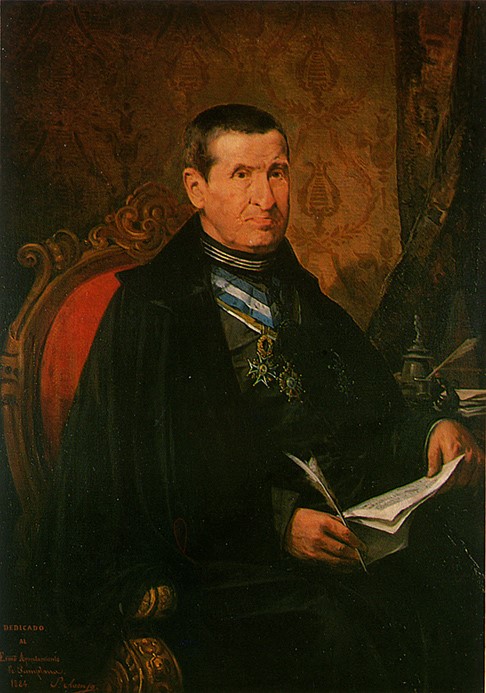 Collection of the Ayuntamiento de Pamplona 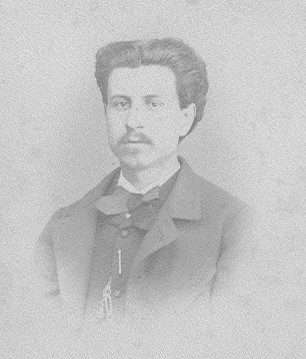 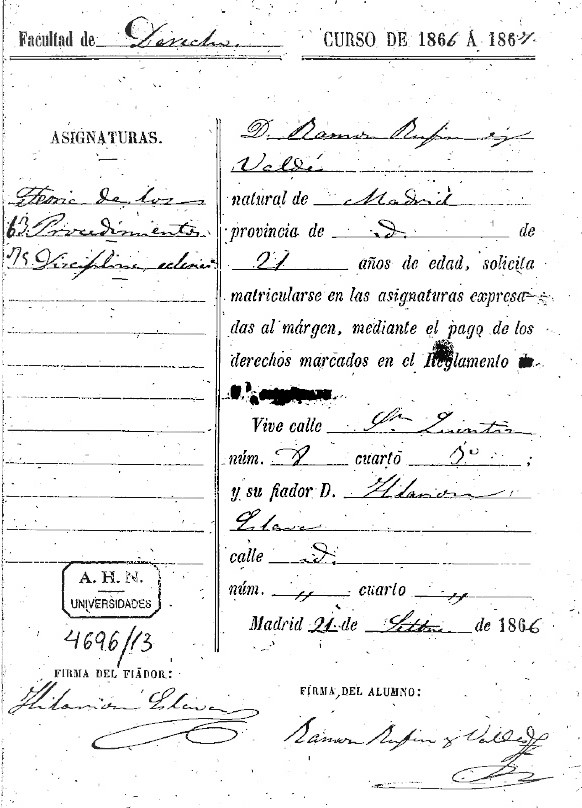 But kinship is not what this is truly about; it is, as it should be, the great works of Eslava, many of them undeservedly forgotten and even lost, and this modest attempt at recovering them to the greatest extent possible. The main objective, therefore, must be to let these web pages become a portal that enables professional and amateur musicians and music lovers to get to know and disseminate the legacy of Hilarión Eslava, especially his music, using re-edited, updated scores and digital audio files intended to give the listener and approximate idea of the music itself.

In this task of restoration of Eslava’s music, the credit belongs in its entirety to my wife Becky. She has brought to this project not only her talent as a musician and composer, but also a sincere and special affection for the music of don Hilarión. With few exceptions, all of the re-edited scores included here are her work, prepared with great care and attention to detail and respect for the original music. Many of the originals consist of digital images with varying degrees of resolution or low-quality copies of contemporary printed scores, often containing errors, and hard-to-read manuscripts in the composer’s own hand or manuscript copies made by others. This ambitious project is still far from being completed, but in just over two years of work we have managed to assemble the most complete inventory to date of Eslava’s work, exceeding 400 compositions, of which almost two-thirds have been located and around one hundred have already been transcribed and published. Suggestions and new contributions, of course, are always welcome.

I would like to also recognize in these notes my brother Carlos, a major instigator of, and collaborator on this endeavor. It is to him that I owe my special interest in maestro Eslava, and the many years of deep research into the person and the music of our ancestor, which has been a great source of information on the project.

Finally, those of us participating in this little adventure would like to dedicate it to our dear and missed brother Félix († 2017), who, without a doubt, would have encouraged us and, with his extraordinary talent as a graphic designer would have made this project even better. 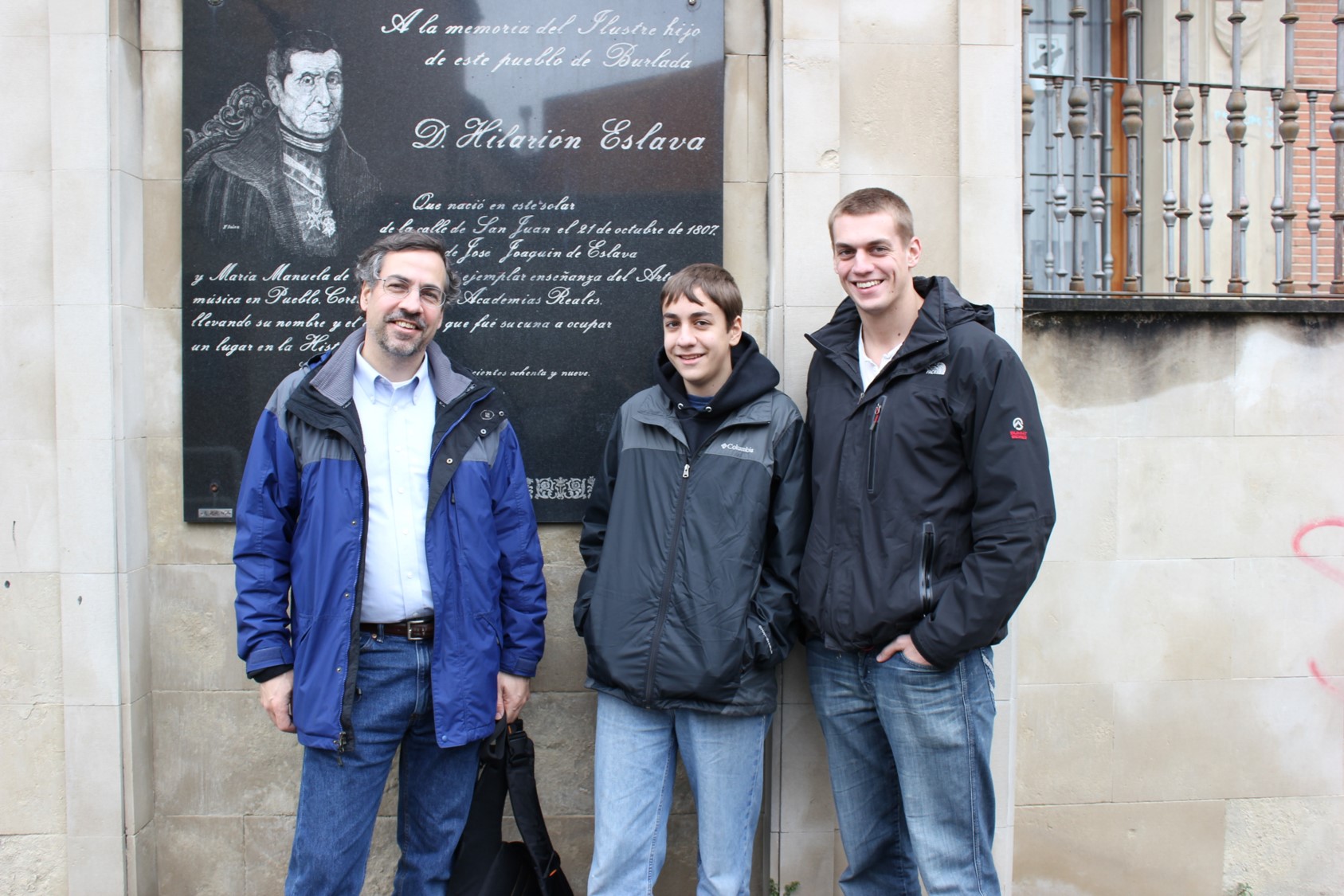